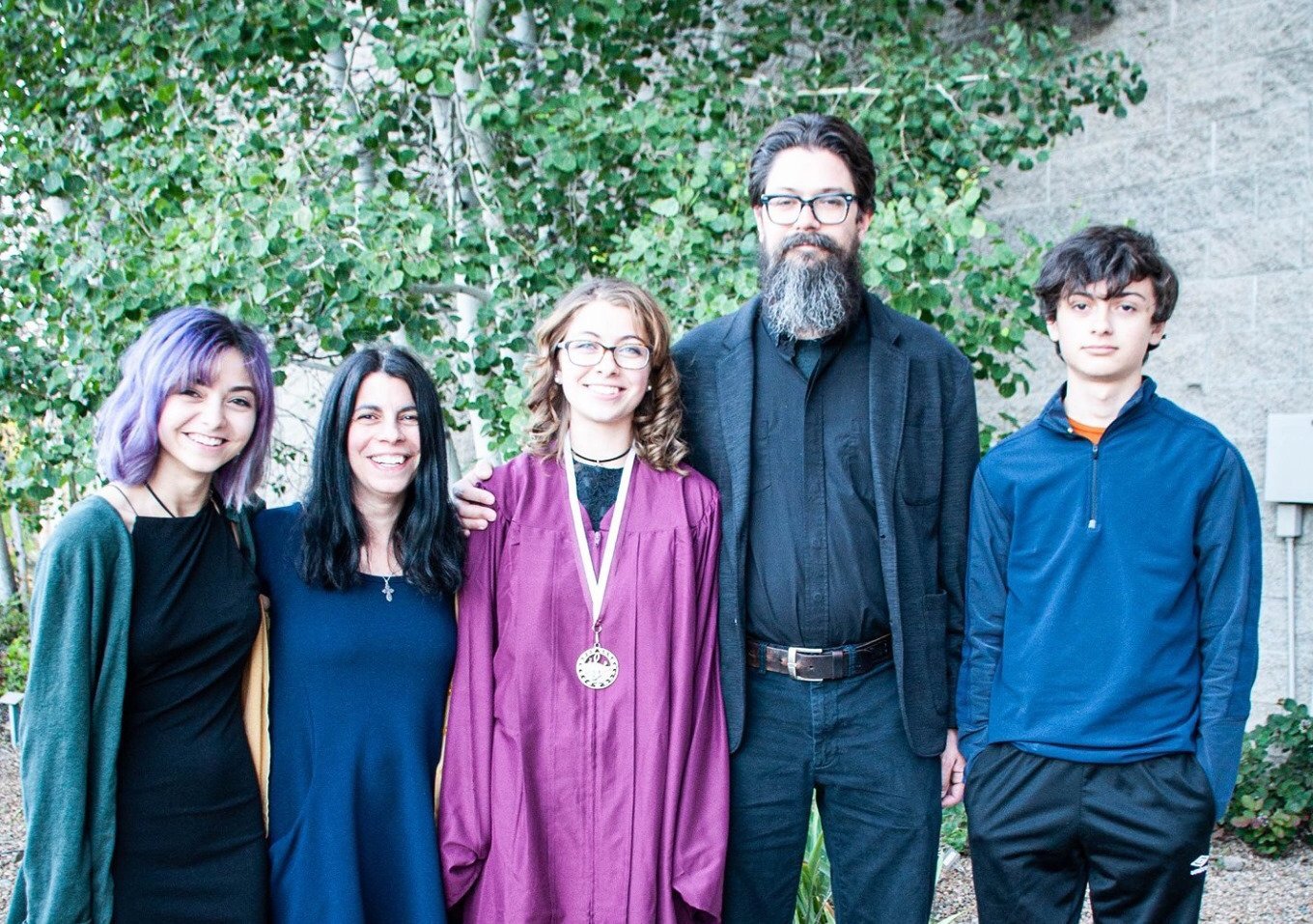 Fr. Jeffrey Frate and Presvytera Marisa were born and raised in Rochester, NY.

Shortly after they were married, Jeffrey began attending Monroe Community College, earning an Associate’s Degree, majoring in Fine Art. After this, while he had applied and been accepted to SUNY Brockport to complete a Bachelor’s Degree in Fine Art, he decided instead to pursue a Degree in Religious Studies at St. John Fisher College, since the things that he was trying to express through painting were essentially spiritual in character. He hoped to continue painting on his own, while at the same time deepening his understanding of theology and spirituality.

While at St. John Fisher he benefitted a great deal from the advice of his academic advisor, a Catholic priest, Fr. Michael Costanzo, who always made himself available to talk, and never failed to offer espresso and Italian cookies as sustenance for conversation. He once gave Jeffrey a small cutting from a vine in a tiny glass bottle of water, which Jeffrey managed to keep with him, even through the process of moving to Boston, until, sadly, several years later, it finally died. He has yet to replace it, but still has the glass bottle in his icon corner. Also, Jeffrey benefitted from sharing many conversations with Professor Robert Brimlow, a Catholic analytical-philosopher-pacifist, who wrote a book that tries to answer the question that is often posed to pacifists, “Well, What would you do about Hitler?”

The move to Boston came shortly after graduating from St. John Fisher. Jeffrey had developed a thirst for Orthodoxy while studying religion to the extent that when he presented and defended his thesis to the Religious Studies’ department faculty, one of the Priests who taught sacramental theology asked him, “Where did you learn all of this Orthodox Theology? We certainly don’t teach it here.”

He decided to apply to Holy Cross Greek Orthodox School of Theology to continue his studies because he had learned that they had very good facilities for married students (by this time Jeffrey and Marisa had 3 Children: Mary, Rebekah, and Peter), and many of the articles that he had read in preparing his thesis had been written by Holy Cross’ faculty members.

Shortly after arriving in Boston for the beginning of the school year, Jeffrey, Marisa and family began attending Holy Trinity Cathedral (OCA) in Boston. They were received into the Orthodox Church through Chrismation on Lazarus Saturday of that first year, and became an integral part of the community there. Jeffrey had ample opportunity to sing in the choir on Tuesday and Thursday Vespers, Saturday at Vigil, and Sunday at Divine Liturgy. Later he was also allowed to begin serving as an acolyte in the altar. A year after their conversion, Jeffrey would have been graduating with a Master’s of Theological Studies degree, but in discussion with Fr. Robert Arida, and with the blessing of the Archbishop Nikon, it was decided that it would make sense for Jeffrey to complete the Master’s of Divinity Degree, which would require another year of coursework. So he graduated in 2009 earning and MDiv degree with the highest distinction.

He had thought that after graduating he would continue on to earn a PhD in Systematic Theology. However, due to a variety of circumstances, his plans fell through.

Thankfully, Jeffrey was able to find work with a friend he had met at the seminary, Bogomil Sabtchev, who worked as a house-painter, something that Jeffrey had nearly 8 years of experience in from his days living in Rochester. Unfortunately, Bogomil was usually unable to find enough work to last through the winter, so this left Jeffrey looking for a job soon after the weather would turn every year. The first year, he found work at a restaurant that he suspects, although there’s no way to know for sure, was a front for the Irish mob. And so it was with relief that he was able to return to painting houses in the Spring. It should also be mentioned that Jeffrey was ordained to the Diaconate by Archbishop Nikon at Holy Trinity Cathedral, a little more than a year after he graduated from Seminary.

Then, when it was getting cold again, Jeffrey was able to obtain a job at Bournewood Psychiatric Hospital in a locked in-patient unit. All of the patients that were there had been deemed either an immediate threat to themselves, or to other people. He worked there for nearly two years in, perhaps, the lowest position available, that of Mental Health Worker.

Shortly after leaving work at the Psychiatric Hospital and returning to work with his friend Bogomil, who now had a solid and growing painting company that had work even in Winter, Dn. Jeffrey was ordained to the Holy Priesthood, again by Archbishop Nikon at Holy Trinity Cathedral. He served there as the assistant priest to Fr. Robert Arida for over a year before being placed on-loan to the Metropolis of San Francisco and assigned to serve as the rector of St.George Orthodox Church in Prescott.