Source: From The Desk of Father Barnabas 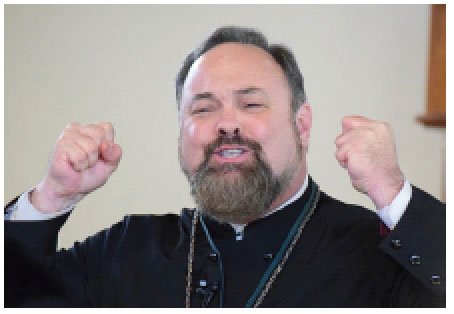 As a young man growing up in a Pentecostal church, Fr. Barnabas always knew that he wanted to be a preacher because all of the powerful men he knew were men of the pulpit, and he wanted to be just like them. The church had a profound impact on his life, with the lively services, the thundering sermons and the emotional altar calls gripping his young heart and feeding his hunger for an intimate encounter with God.

He was the youth choir director and his youth group traveled around the Southeast singing and preaching the Good News. Over the years, he began to have difficulty dealing with those times when the level of religious excitement wasn’t at a fevered pitch. He knew he was excited about Jesus, but began to question whether he knew Him or not. Quick and simple answers weren’t working for him; he was missing something. Eventually, Fr. Barnabas became an Evangelical and was committed to the theology of Protestant Reformation. While he enjoyed his studies, the more he studied the more he became convinced that he was missing something. He would then discover church history.

During an internship at Christ Church in Nashville, Tennessee, Fr. Barnabas engaged in hours of discussions with an associate pastor about theology and church history. He and the pastor, Dan Scott, Jr., had many of the same questions. Dan shared with him a dream that Dan once had about being in a church with candles, incense and pictures on the wall. Dan stated that in the dream he felt a strong presence of God. There were old bearded men, one of whom asked Dan,“where have you been?” On Dan’s advice, Fr. Barnabas read the book, The Orthodox Church, by Timothy Ware. He was captured by the history of the Orthodox Church and the book proved to be an eye opener for him. He found several converts to Orthodoxy and met with two of them.

By the fall of 1989, he was pastoring a growing Evangelical Protestant congregation in Woodstock, Georgia called Church of the Firstborn. He was also working as a Promotions Manager at In Touch Ministries in Atlanta. Each week, Fr. Barnabas met with a good friend, Rod, to discuss theology and the various books on church history that they were reading. Upon learning of the early Church, he tried incorporating what he had learned into his local congregation. Unfortunately, he realized that the theology of the early Church was not compatible with his current theology; it was like mixing oil and water. It just didn’t blend.

In 1992, Fr. Barnabas began to have discussion with some men that became Orthodox. He was drawn to these men and their journey. One of the men invited him to attend an Orthodox church in Indianapolis. The experience was emotional, overwhelming and exciting because Fr. Barnabas found the historical perspective he was looking for in a modern setting. For the next several years, he studied, read and experimented with different styles of worship. Eventually, he came to grips with his spiritual journey and his pastorate in Atlanta. When a visiting pastor prayed for the congregants, Fr. Barnabas prayed that the pastor’s prayers wouldn’t harm them! He knew he had to make a choice and make it he did. He left his pastorate and together with his family and 20 others, went on to be chrismated into the Church at St. Mary of Egypt Orthodox Church (Orthodox Church in America) in Atlanta in November of 2001. Their journey to Orthodoxy took nine years, but they were finally home.

In August 2007, he and his family moved to Boston, MA so that he could attend seminary at Holy Cross Greek Orthodox School of Theology, and on November 8th 2009 (a little over 8 years to the day they were received into the Church) he was ordained to the diaconate by His Eminence Metropolitan Alexios of the Greek Orthodox Metropolis of Atlanta. In March of 2010, he was ordained to the priesthood by Metropolitan Alexios at the same cathedral. After graduation from Holy Cross Greek Orthodox School of Theology, he was assigned to his first parish – Sts. Raphael, Nicholas, and Irene Greek Orthodox Church in Cumming, GA.

Lord, be gracious to us sinners.