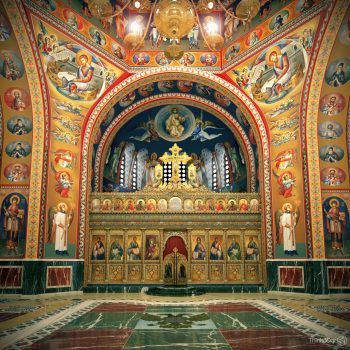 It is said that wine gets better with age. The same can be said for the Orthodox faith which has existed for 2,000 years. This holds true for Randy and Chris Shatto as they came to discover that Orthodoxy is a faith that is as good today as it was in the beginning all those long years ago when it was first tasted by the Apostles. Like many purveyors of wine who sample different varieties before they find the one that stands out the most, Randy and Chris sampled different Christian denominations and churches prior to their settling on Orthodoxy as the faith that stood out to them.

Having met in 1999 and becoming engaged three and a half years later, Randy and Chris contemplated the importance of spirituality in their future marriage. He was raised Episcopalian and she a Roman Catholic. In the years prior to getting married, neither had been actively involved in their respective churches. They both agreed on the need to have God in their lives and to find a church that would allow them to reconnect with Him. Which church would it be?

Further discussion led to a mutual discomfort with the directions that their former churches were taking. While change for the most part can be a good and necessary thing in life, when it comes to faith and what one believes in, change can be more harmful than helpful. The trend towards modernization in religion left Randy and Chris feeling that they needed to look to the past, not the present or future to find a faith that did not compromise its beliefs for the sake of being trendy.

This was a feeling shared by Randy’s parents who left the Episcopal church after years of searching and questioning faith themselves. They eventually found and embraced Orthodoxy and had many discussions with Randy about it. His skepticism caused an initial resistance to come and see the ancient faith for himself. The seed was planted, but Randy wasn’t ready for it to grow.

It wasn’t until he and Chris visited the different churches and came to the realization that, despite the good intentions of them, they all had the misguided belief that the word of God needed to be rewritten or corrected in some way, going back in time was what they needed to do. So, they did. Having received a book from Chris’s brother that showed a denomination timeline tracing back to the Great Schism of 1054, Randy and Chris discovered that the Orthodox Church had been in existence since the day of Holy Pentecost and has remained unchanged ever since. The seed was finally ready to grow.

They began to attend Sunday liturgies at Holy Cross Orthodox Church and although it was unfamiliar, there was a feeling of comfort and peace. Surrounded by icons, incense and liturgical singing, Randy and Chris were inspired by the deep reverence that was shown by all, especially for the Eucharist. They began to attend adult education classes and read many books about Orthodoxy. The more they learned, the more they knew they had found what they were looking for. Like his parents before him, Randy and his wife became Orthodox.

They have never looked back…except, of course, to the ancient faith that brought them back to God.