Source: ‘He Is Painted As If He Were A God’ 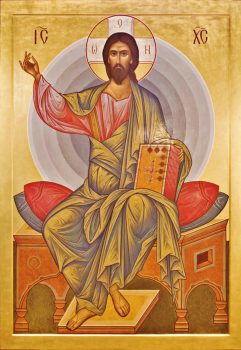 Fr. Michael Harry was brought up a Methodist in a small Cornish town with all the trappings that would entail. Sunday school and the Bible, and not room fro anything else. Despite his religious upbringing, or perhaps because of it, he had a rebellious streak, turned away from the faith, and became a Buddhist. It was a way of having religion without a god.

But Christianity wouldn’t go away.

At university, He started attending Evensong and eventually demanded that the college chaplain convert him. He would leave the university as an Anglican and married. In their village church, he began training a lay reader. He had to take courses on the Bible, church history, contemporary social issues and church practice. These courses had an intentional modern spin to them. The churches roots seemed to have been forgotten and was taking it ethical cues from society rather than the other way around.

He began to look elsewhere.

He called an Orthodox bishop who had written the only book on Orthodoxy he knew about and asked, “So what do I do?” He was directed to an Orthodox church and a priest. When he met the priest all his anger and bitterness had gone. He was taken to the iconostasis and in front of the icon of the Mother of God the priest said,”This is the Christmas story.” Then he taken before the icon of Christ. He described how the face had been made to look authoritative and that the robe presented the figure in a very aristocratic way. “In fact”, the priest said, “He is painted as if He were a God”. There was a pause and then he said, “Because that is who He is”.

Our Lord is “painted as if he were a God because that is who He is.”

And that is why Fr Michael Harry became Orthodox.