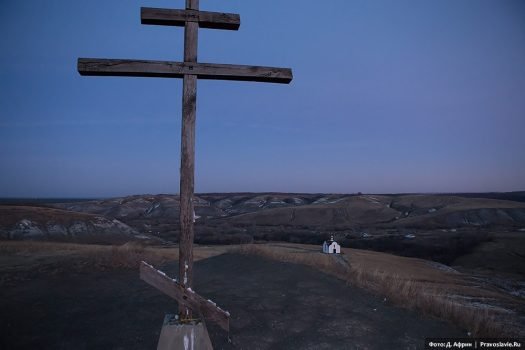 It was late, dark and raining.  I was alone driving.  Tears were streaming down my face such that I had to wipe them away so I could see through the windshield between the slapping of the wipers.  I was on my way home from visiting my first Orthodox Church.  I met with Fr. Markarios, monk-priest of the small mission church in central Montana.  He told me about Orthodoxy and suggested, “come and see” the Divine Liturgy Sunday morning.  This very first visit confirmed in my heart that I was HOME.  I had found the origin, life and final resting place for my soul.  I was overwhelmed as well as ecstatic and at peace all at the same time.

Drifting away from attending church services as a Roman Catholic teen I didn’t give church a second thought until I became a mother in my late 30’s.  Then, after my daughter was born, God, Christ and Church became,  all  of a sudden, of paramount importance to me.  My daughter was going to know God through Jesus Christ.  However, I didn’t want her learning the punitive God of Catholicism.

Growing up in New England just south of Boston where the scandal of abusive Catholic priests became a nation wide blight on the Roman Catholic Church made me wonder if there was another Christ-centric Apostolic religion I could explore.  I started my exploration by reading a comparative religion book that had a section on the Orthodox Faith.  Once I read about Orthodoxy I wondered why I had never heard of this religion before.  Doubtful there would be an Orthodox Church any where near me in central Montana I went to the phone book and sure enough there was St. Constantine and Helen Greek Orthodox Church in the same town I lived, listed right there, under Churches.

Sunday morning I awoke excited with anticipation and anxious to attend the service hoping to find what I was looking for, but found so much more.  Experiencing the Divine Liturgy for the first time was transforming.  I had never felt, nor experienced, such beauty and connection with what must have been the early church of the Apostles.  I felt like I was transported back in time 2,000 years to the church of the Apostles and Fathers of the church.  Candle light, incense, icons, chanting and the language was so different from anything I had ever experienced.  I knew this was exactly what I longed for.  That was 24 years ago and my love for the faith has only deepened during the passage of those years.

Some of the most poignant differences for me, between Catholicism and Orthodoxy, is the western emphasis on sin, causing my informative years to be dominated with guilt and shame.  Orthodoxy lifted those feelings, replacing them with feelings of Love and joy.  I felt for the first time that a huge weight had been lifted off my shoulders.  I also loved the way the Orthodox services were like reenactments of the life of Christ bringing the Bible stories to life where WE the people actually participated in His life.  Orthodoxy made me want to learn as much as possible about Christ, The Fathers of the Church, Christian theology, the reasons why we believe what we believe, and do what we do.  Catholicism made me want to be done with church and to get as far away from church as I could, forgetting it until I had to face it again.

I can’t say whether I’ve been blessed by Grace from the Holy Spirit, or my guardian angel led me to Orthodoxy, but I do know that my journey has been a transforming and fulfilling one, for which I shall be forever grateful.