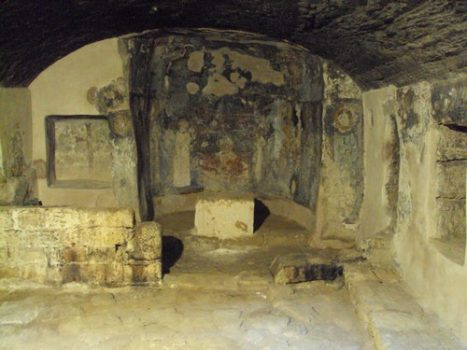 Nerissa McCanmore had been going through a long, tiresome spiritual journey like many many people who’ve been through many denominations before coming to Orthodoxy. she was raised in South Bend, Indiana as a Nazarene, a Holiness sect with the doctrine of total sanctification, but without the extremes of another Holiness sect, Pentecostalism.

She went off to “Roanoke” College in rural Wisconsin in 1991.  To her surprise, there were no Nazarene churches, and she had no car, so she went nowhere for about a month.  (The college was out in the country.) She could only go to a church occasionally, whenever a friend could get a ride. Once, she was taken to the Evangelical Free Church; it was similar in many ways to her own, except that it was “livelier.”  She asked for church information, and it seemed to be much like the Nazarene Church, so she felt she found a church home.

She found a new boyfriend who was Catholic and while she was impressed by her church, she couldn’t convert to Catholicism because she felt it would betray everything she had been taught. Though she tried to hold firm in her faith, college was also a time of immense spiritual testing; she often failed. she fell into the Charismatic teachings of Pat Robertson. It was more fortune-telling than true works of the Spirit, but she didn’t know this at the time, and fancied myself some sort of prophet. Eventually, she wanted nothing to do with Charismatic beliefs.

In 1995 she finally met her husband, Cugan, a Lutheran (Missouri Synod).  The church agreed to marry them on April 19, 1997, without either of them having to convert. She found another Nazarene house church, but going from her husband’s Lutheran church to her church became tiring and they wanted to have children, so they agreed to start looking for a church which suited both of them. They thought they found such a church in an independent Bible church in 1996 or 1997.  However, they eventually discovered that neither “independent” nor “non-denominational” meant “ecumenical,” but rather that such churches were usually fundamentalist or evangelical.

As for the church they were going to, it was very fundamentalist, with doctrines she could not agree with such as evolution being wrong, other churches worship incorrectly and a wife’s submission to her husband. In college, she read the writings of feminists, and that influenced her thinking. She did a little investigating on the Internet, to find out what sort of church this was. What she found in their creed on this website scared her.  You had to agree with things which were very fundamentalist, which she did not agree with.

They started to attend a local Evangelical Free church after that in 2000. It met in a middle school auditorium, and had about 200 members. They were there for quite some time, even getting involved in different ministries.  She began helping in the youth group, and loved it.  She was happy being in this church.

Each year, the pastor and several of the teens and adults went to Russia to evangelize.  She didn’t know in those days that the Russian Orthodox Church feels like its toes are being stepped on by all these Protestant missionaries. Her pastor said in church one day after returning from a Russia Team trip: “I visited the Russian Orthodox Church.  It’s not Christian.  It’s full of idols and paganism.” This must have been in 2003 or 2004; even then, when she had no thought of becoming Orthodox, she knew what he said was wrong.

My husband Cugan resented the attitude toward Lutherans: he never had a conversion experience, because he was raised in the faith and always believed it.  How can you “convert” to a religion you’ve always been a part of? Another thing making Cugan uncomfortable: the constant emphasis on going out and doing things.  She felt like the church members were seen as tools, rather than people who needed to be healed and built up themselves before trying to evangelize other people.

In 2002, some big tithers had left the church for various reasons, some disgruntled and some simply moving, leaving the church in financial straits. The pastor began preaching heavily on tithing, but they were in debt from student loans and other things, and couldn’t give any more; the pressure was too much for Cugan, who paid most of the bills. The pastor went on sabbatical and did a lot of reading and praying.  When he came back, probably early in 2003, everything changed.

He began preaching “Cat and Dog Theology,” which used the supremacy of God doctrine which Piper, a Calvinist, has been spreading in Evangelical circles.  To us, this was strange doctrine, which they had never heard of before. We knew this was wrong, that the main reason for the Cross and other things was love, though they had no materials besides the Bible to back them up. In early 2003, the youth group was disbanded for lack of money to pay the youth pastor, and the youth pastor essentially fired.  It was so distressing that at least one of the kids cried. She had helped in the youth group for nearly 2 years, and it had become her life, possibly a calling.  These were her friends.

It was now early 2004, she had a baby, and with no youth group to take her out of the house, her social life was dead.  It took her a long time to get over the loss of the youth group.  She resented the pastor for firing the youth pastor. SHe heard in the summer of 2005 that the E-Free church was dying, with so few members they didn’t know if they could get another pastor when that one left.  They could not have stayed even if they tried, because that church would soon no longer exists.

She began to do a lot of searching on the Presbyterian Church-USA website, which is full of information, and felt satisfied that it was a good denomination. The local church is thriving, and has plenty of programs for children.  The PCUSA allows considerable theological freedom among its members. Since she was in the midst of theological searching, this was a comfortable place to be.  She and Cugan became members in April 2005, and felt they were finally home.

Then one Saturday evening, probably in 2004 or 2005, she sang one too many silly songs in their new church’s contemporary service, and began to want to sing hymns again. She also didn’t like the invasion of Powerpoint into church services.  She preferred looking down at a hymnbook. She looked up critiques on the Web to see if anybody agreed with her. Many sites opened her eyes to the problem of bringing modern culture into the church, rather than influencing modern culture with the church. She was beginning to see the man-centered nature of trying to bring your favorite styles of music into the church, where first and foremost you are to worship God with reverence.

Then, one day, some time in mid or late 2005, this guy Richard posted on a Goth Christian Web forum, listing the problems with Evangelicalism. He was Greek Orthodox and a new convert. She knew very little about Greek Orthodoxy, so she asked Richard what the Orthodox church believes on various doctrines.  He couldn’t answer everything, but his answers amazed her.

She began checking into the Orthodox view of Hell, using websites Richard provided to her, and came across River of Fire by Alexandre Kalomiros in late 2005. It blew her mind. If you read it, you’ll understand why; after that, everything changed.  She found that the Orthodox version of history was a bit different, though it did indeed have the five patriarchates. Also, the Orthodox had better theology that was more loving than the fundamentalist doctrines she was used to. The more she searched, the more intrigued she became.  She used to think the Orthodox were just Eastern Catholics who let their priests get married and had a Great Schism with the Pope in the Middle Ages.

Instead, studying the Orthodox Church became, for her, like an archaeologist coming across an island full of Stone Age people: The Early Church preserved throughout the ages, untouched by the various changes in Western Christianity. However, as time went on, and she read various articles on the Web and posts by Orthodox and Catholic Christians on message boards, Orthodoxy became more and more intriguing. She knew for sure that dozens or even thousands of Protestant denominations and countless, competing doctrines had worn her out.  She didn’t know who to believe.  She wanted to find the doctrine and worship of the Ancient Church, the standard against which everything else must be compared.

She bought the Orthodox Study Bible and began using the prayers in the back of the book.  She began practicing the sign of the Cross. She left Evangelical forums which opposed everything even remotely Catholic, and joined an Orthodox forum to learn more. She became more and more dissatisfied with contemporary worship services, megachurch practices and Protestant doctrines of all types–Charismatic, Evangelical, Baptist, Presbyterian, Lutheran.

The more she studied the Early Church Fathers and histories, the more convinced she become that the Orthodox faith has the pure faith of the Early Church–and that it’s the most loving of all denominations she had investigated. In September or October of 2006, when they were still going to the PCUSA church, the pastor announced that the 10:30 service would be “blended,” with contemporary and traditional worship. She sang the songs along with everybody else, but she felt so empty, strained.  She feared the songs did not please God because they did not fit a “proper” worship service–maybe a youth group meeting, but not a worship service.

She had only just read in the Old Testament God’s prescription for worship: complete with beautifully crafted artwork, rich clothing, and ceremony, far more like a Catholic Mass or Orthodox Divine Liturgy. In November 2006, she read Bishop Kallistos Ware’s story of his conversion to Orthodoxy.  His concerns with the Anglican church were the same as mine with the PCUSA–answering questions she had, such as, is it okay to stay where she was, and should she become Catholic rather than Orthodox?

By the time she stepped into an Orthodox church in November 2006, she was finally ready to submit herself to the teachings of the Holy Apostolic and Orthodox Church.  She was exhausted. The mere thought of going back to the PCUSA church the following Sunday, made her stomach twinge.  She was looking for the oldest, purest doctrine and practice, something she could trust; she found it here.  Here she also found holy worship, and a means to union with God. Every day that passes, she feels certain that Orthodoxy is the original faith of the Apostles–that she has finally found what she was looking for.  And that’s why she entered the catechumenate of the Greek Orthodox Church on December 2, 2006, and joined the Church on January 10, 2009.