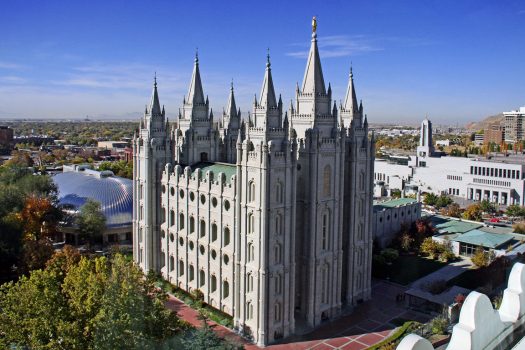 Fr. Justin Havens of Sts. Peter and Paul Orthodox Christian Church in downtown Salt Lake City. claims, ” 60 percent or more of our parish is made up of converts. About half of those are former Latter-day Saints or Mormons.”

This is the story of one of those converts from LDS to Orthodoxy.

After Mormonism and before Orthodoxy, Rick Scouler, spent several decades within the Pentecostal/charismatic movement.

He felt that everything was emotion based to too much of an extant. Not that emotion was a bad thing, but “it seemed Christ had become way too familiar. Instead of awe and reverence, to me, it seemed it was just too easygoing and relaxed.”

They met Father Justin and everything changed. Their conversations led to a friendship and a study of what th early church worship was like.

Some things were hard to take in like icons and murals of saints, and incense. Some things like soliciting the prayers of saints, and Mary, the mother of Jesus seemed down right heretical. But over time all his hesitations were met with solid biblical answers.

“It seemed so ‘Catholic,’ you know? But then we understood it was not worshiping her, but giving her honor,” Scouler says. “One thing I like about Orthodox worship is it emphasizes God’s majesty. There is honor given that is, after all, quite fitting for God.

“It’s like I’m home, like I’ve got my faith back; the awe of it all is back. I’ve got that real desire to serve God and please him.”