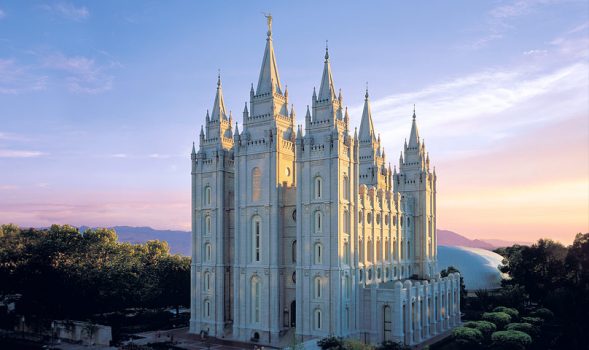 Fr. Justin Havens of Sts. Peter and Paul Orthodox Christian Church in downtown Salt Lake City. claims, ” 60 percent or more of our parish is made up of converts. About half of those are former Latter-day Saints or Mormons.”

This is the story of one of those converts from LDS to Orthodoxy.

Suzanne and Bruce Plympton, who drive in from West Jordan on Sundays, are among the former Mormons who found there way to Sts. Peter and Paul.

Before coming to Orthodoxy she became an evangelical from Mormonsim. As an evangelical she served as a children’s minister and church secretary. But she was not fulfilled there either.

“I was stagnant in my faith. I had always believed in God, but it wasn’t changing my life; I wanted to grow closer to him.”

Suzanne was introduced to Orthodoxy by her sister. After getting over the culture shock of this foreign church she saw what she had been missing.

“At first, I didn’t understand a thing. But I kept studying it; I had always wanted to know the truth,” she says. “I realized the Orthodox Church had been around for 2,000 years, had carefully guarded their theology and had not allowed popular beliefs to change them.”

It was not a short journey but took about five years, for her and her husband to become Orthodox, and to never look back. She had found the deep experience she had been looking for.

“The church that Christ established, that I had been seeking, has always been here,” Suzanne says. “I’m part of the body of Christ, and it’s so deep your feet never hit the bottom; there’s so much to learn and experience.”