Source: From Russia, With Love 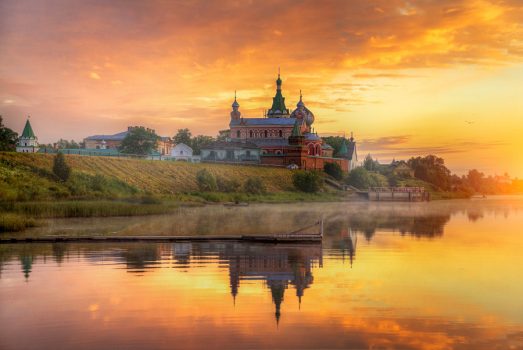 In Russian, Matushka means “mother,” and Russia is often referred to as Mother Russia by those for whom it is home. It is a traditionally feminine and maternal personification of a country that has some of the strongest Orthodox roots anywhere within the Church. For Gary Summers, who is not Russian, it was the call of his spiritual “mother” that led him to the Orthodox faith. His journey to Orthodoxy began with a visit to St. Petersburg, Russia many years ago.

While in the process of adopting two children with his wife, Gary visited the cathedral of St. Isaac. Impressed by the icons of the Lord, the Theotokos and the saints, he was stunned to see Russian soldiers in his midst. Thinking Russia to be an atheistic country with no connection to God, Gary was amazed to discover otherwise. Despite years of communism, Russia did allow the church to make a comeback that was greatly welcomed by its citizens.

Like many converts to the faith, Gary’s religious background comprised of several Protestant denominations including Baptist to Church of Christ to Presbyterian. He knew nothing of the Orthodox Church. Church history did not play a prominent role in any of the other churches that he belonged to. The history wasn’t all that important and this troubled him deeply.

A few years later, following a difficult divorce, the loss of his home and business, Gary found little comfort or refuge in his church of the time and his faith weakened considerably. He returned to Russia for a tour and much needed respite from his personal troubles. The tour guide was a convert to Orthodoxy and Gary enjoyed several conversations with her during his visit. His curiosity about the Orthodox Church was renewed and his desire to learn more of the rich history of the Church was piqued. Following the fall of communism in the early 1990s, Gary discovered that the Russian government now encouraged the teaching of Christianity to improve life for its citizens.

When Gary moved to Williamsport in the year 2000, he returned to his Protestant churches only to be disillusioned by the lack of substance and interest in their own history. He enjoyed the people and the music but he heard a call in his heart that came from Russia and the Orthodox Church. As he satisfied his thirst for more knowledge of the ancient Church by reading everything he could find about it, he came to ask himself why he wasn’t a part of the Church whose history traces back to the Apostles themselves. He would come to learn of an Orthodox Church in Williamsport and after driving past the church a very Orthodox three times, he finally went inside for a service.

Overwhelmed by the sights, sounds and smells that are unique to the Orthodox Church, Gary felt the presence of God very strongly. Coffee hour was a pleasant experience of being welcomed by the parishioners and enjoying fellowship with them. After a second visit the following Sunday, Gary knew he was home.

When “Mother” calls, we need to listen and heed that call, for as a real mother calls her wayward child home at the end of the day, so the Mother Church calls home hers.