Source: How A Southern Baptist Minister Found His Way To Eastern Orthodoxy 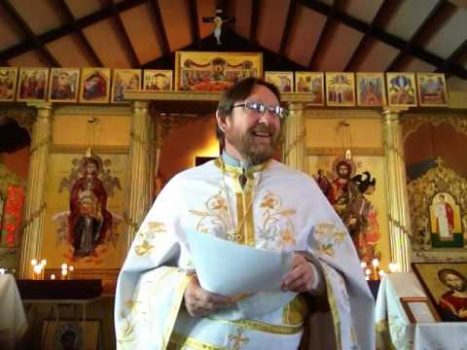 Bob Frisby was what he calls, “a lay me down to sleep Christian.” Bedtime prayers and an occasional foray to church were the extent of his religious upbringing. Bob grew up fairly oblivious to what it meant to be a Christian but in the autumn of 1974 Bob’s identical twin brother, Bill, was killed in a car wreck. This led to his family being Christian which led Bob to a Baptist college where he met his wife, Laurel. Bob and Laurel were married in 1980 and 5 years later Bob became a pastor in the Southern Baptist faith.

In 1997 Bob, finances and the pressures of raising three teenage daughters lead them to decide to find employment outside the church. He and Laurel continued to be very involved in church ministry but Bob decided to resign and became a financial adviser.

Over the years Bob longed to be back in full-time ministry but continued to work in the financial services field. The desire of his heart was to be back in ministry but this desire was accompanied by a growing dissatisfaction with the evangelical/Protestant churches he had attended. This drove him to search for something different from the churches he had known before. He began to read literature on spiritual disciplines and worship by Roman Catholic authors. He began to realize that what he was looking for was a historical, liturgical church. The question was, “Which one?”

In 2009, Bob discovered there was an Orthodox Church in a nearby town. He attended a Vespers service and drawn by the beauty of the icons, the fragrance of the incense and the meaningful worship, he knew immediately that he had found the church he was looking for. His wife, Laurel would also begin attending services with him and she too decided that this was the church for her. The rich traditions and beautiful worship had taken hold of her.

Bob and Laurel were baptized into the Orthodox church 33 years to the month from when he had been baptized as an 18 year old at a Baptist church camp.

Bob would later go on to become a priest, now called Fr. Thomas, fulfilling both his desire for a connection to a historical faith and to be involved in ministry