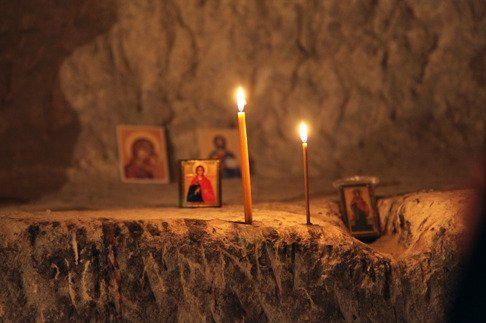 I came to Orthodoxy through my husband.

Before I get to that let me tell you that the liturgy wasn’t too foreign to me. I was raised Catholic. My parents weren’t really devout, but I found myself at an young age (eight or so) thinking about human existence, my singular existence. Fast forward to my early 20’s I was driving in my car and felt an overwhelming presence. I felt God revealed to me how He has been with me all along in my life.

During this time I had started to go to a non-denominational church with some friends. This is where I learned of a personal relationship with God. This church became a Vineyard church. During this time I felt I learned about how community should be. The Vineyard is were Jeff and I were married. Jeff was attending college for religious studies and was reading more about the early church. We then started attending the CEC (Charismatic Episcopal Church). Here was a mix of Catholicism, A touch of Orthodoxy and a lot of Protestantism. I felt going here my faith became deeper.

After Jeff’s graduation from St. John Fisher, he pursued further education with the early church. When we moved to Boston to the seminary, we searched for an Orthodox church that was English speaking. We eventually were Chrismated at Holy Trinity Cathedral.

So I guess in less words, my husband brought me to Orthodoxy. I love the deep rich history of the faith. The beauty of the services and the struggle that comes with it. It is a never ending journey.

No matter how “dry” I become, I always feel Orthodox is a part of me.