Source: An Oasis in the Desert 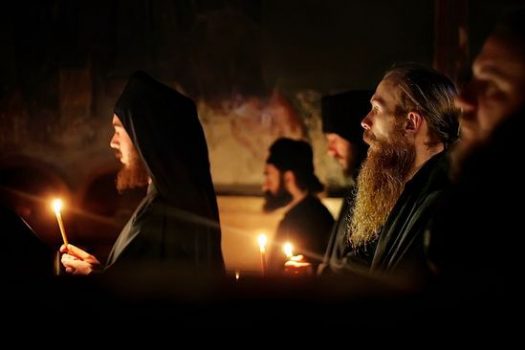 Although grateful for his Protestant upbringing which included living with his family in Austria for a year when he was a child, Dr. Eric Affsprung struggled to find the living water of the true faith in a religious desert he found himself wandering in for most of his adult life. He had always been drawn to places of worship, religious books and ideas and would gaze up at the altars of the European churches he visited with his family. Rome held a fascinating intrigue for him with its ancient ruins and Christian catacombs.

As a young adult while working in New Mexico, Dr. Affsprung was drawn to the indigenous Catholicism of the high desert country. His first thought of ministry came to him one summer afternoon when he worked for the Forest Service in Colorado. He briefly attended a Protestant seminary but, thinking himself too immature, withdrew after only one year. By his late-20’s, he lost his spiritual moorings. Complicated by loss and other challenges that made him distrustful of happiness and relationships, and left him feeling angry and defensive toward God and Christianity, he knew that something was missing from his life.

With the Protestant church no longer a refuge for him due to its adoption of social club status and self-righteous political activism, Dr. Affsprung flirted with Eastern religions but felt that they were empty, nihilistic and self-absorbed. Citing his own emotional immaturity, stubborn pride and lack of faith as contributing to the blocks he experienced on his journey to Orthodoxy, he was faced with impossible choices, none of which could quench his thirst and search for the true faith.

Eventually, he would have his first encounter with an Orthodox Church in Williamsport. Feeling that it was the work of the Holy Spirit leading a lost soul home, Dr. Affsprung was drawn in by the friendly community of Holy Cross and the new and profoundly different way that the Scriptures were read and understood. The knowledge of there being room for the life of the mind and the heart, for the intellectual and the mystery, gave him the sense that he had finally found the cup of cold water that his own parched mind and heart yearned for.

The Orthodox Church is a church built on a firm foundation and with a direct link to the ancient church of the Apostles. Having found his oasis in the Orthodox Church, Dr. Affsprung joined the Church at the age of 54 with the new name of Anthony. He chose this name as a reflection of the Monastery of St. Anthony which was built in the 4th century around a small palm oasis in the middle of the Egyptian desert.

What a fitting image for all parched pilgrims who seek the true faith!