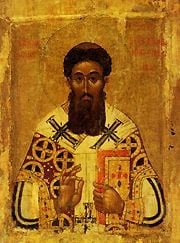 This divine Father, who was from Asia Minor, was from childhood reared in the royal court of Constantinople, where he was instructed in both religious and secular wisdom. Later, while still a youth, he left the imperial court and struggled in asceticism on Mount Athos, and in the Skete at Beroea. He spent some time in Thessalonica being treated for an illness that came from his harsh manner of life. He was present in Constantinople at the Council that was convened in 1341 against Barlaam of Calabria, and at the Council of 1347 against Acindynus, who was of like mind with Barlaam; Barlaam and Acindynus claimed that the grace of God is created. At both these Councils, the Saint contended courageously for the true dogmas of the Church of Christ, teaching in particular that divine grace is not created, but is the uncreated energies of God which are poured forth throughout creation: otherwise it would be impossible, if grace were created, for man to have genuine communion with the uncreated God. In 1347 he was appointed Metropolitan of Thessalonica. He tended his flock in an apostolic manner for some twelve years, and wrote many books and treatises on the most exalted doctrines of our Faith; and having lived for a total of sixty-three years, he reposed in the Lord in 1359.

His holy relics are kept in the Cathedral of Thessalonica. A full service was composed for his feast day by the Patriarch Philotheus in 1368, when it was established that his feast be celebrated on this day. Since works without right faith avail nothing, we set Orthodoxy of faith as the foundation of all that we accomplish during the Fast, by celebrating the Triumph of Orthodoxy the Sunday before, and the great defender of the teachings of the holy Fathers today.

Apolytikion of Sun. of St. Gregory Palamas Plagal of the Fourth ToneO Gregory the Miracle Worker, light of Orthodoxy, support and teacher of the Church, comeliness of Monastics, invincible defender of theologians, the pride of Thessalonica, and preacher of grace, intercede forever that our souls may be saved.

Kontakion of Sun. of St. Gregory Palamas Fourth ToneHoly and Divine instrument of wisdom, bright and harmonious trumpet of theology, with one voice, we praise you, O Gregory, preacher of God. Since your mind now stands before the First Mind, guide our minds to Him, O Father, that we may cry to You, “Hail Herald of Grace.”

4 Love is patient and kind; love is not jealous or boastful; 5 it is not arrogant or rude. Love does not insist on its own way; it is not irritable or resentful; 6 it does not rejoice at wrong, but rejoices in the right. 7 Love bears all things, believes all things, hopes all things, endures all things.8 Love never ends;