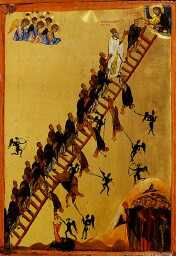 Listen Here: Sunday of St. John of the Ladder

St. John of the Ladder

The memory of this Saint is celebrated on March 30, where his biography may be found. He is celebrated today because his book, The Ladder of Divine Ascent, is a sure guide to the ascetic life, written by a great man of prayer experienced in all forms of the monastic polity; it teaches the seeker after salvation how to lay a sound foundation for his struggles, how to detect and war against each of the passions, how to avoid the snares laid by the demons, and how to rise from the rudimental virtues to the heights of Godlike love and humility. It is held in such high esteem that it is universally read in its entirety in monasteries during the Great Fast.

BRETHREN, when God made a promise to Abraham, since he had no one greater by whom to swear, he swore to himself, saying, “Surely I will bless you and multiply you.” And thus Abraham, having patiently endured, obtained the promise. Men indeed swear by a greater than themselves, and in all their disputes an oath is final for confirmation. So when God desired to show more convincingly to the heirs of the promise the unchangeable character of his purpose, he interposed with an oath, so that through two unchangeable things, in which it is impossible that God should prove false, we who have fled for refuge might have strong encouragement to seize the hope set before us. We have this as a sure and steadfast anchor of the soul, a hope that enters into the inner shrine behind the curtain, where Jesus has gone as a forerunner on our behalf, having become a high priest for ever after the order of Melchizedek.